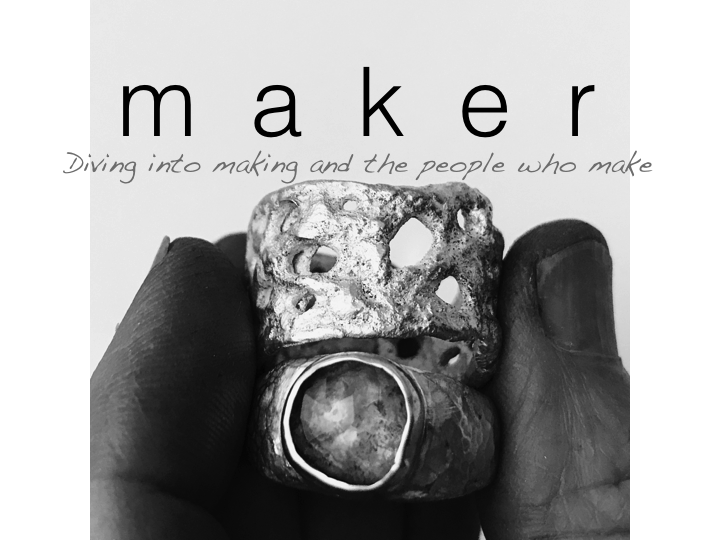 I love raw stones and have always wanted to learn how to set them using lost wax. The trick in working with the wax is to be able to form the wax around the stone and more importantly to be able to remove the stone without messing up the model before casting. This purple wax is quite stiff compared to blue or pink wax so I decided to build up the setting to a certain point and add prongs AFTER the casting was done. That was the plan.

After casting the stone fit easily into it’s setting but it needed those strategically placed prongs to hold it securely in place.

Now, this is where things got ugly and I must admit it’s because I’d been impatient at this point (ie; I didn’t take the time to properly file clean joints between the ring and the new prongs and I used way too much heat). But I was also liking the reticulation happening on all the once-smooth droplets so I kept going.

Now…if you’ve ever worked with solder you’ll know it reaches a split-second magic moment in time when it glows and then flows through a joint. If you’re not paying attention for even a second you can miss that moment.  And as you continue to apply heat the metal does what metal does as it changes from solid to almost molten – it shrinks into itself, with droplets coalescing into other droplets nearby, forming random lumps. Soooo…now my carefully carved ring was reticulated (nice) but had 2 ugly lumps in it. I figured I could still work with it though. Plan B was to saw off the prongs, anneal the shank and see if I could magically secure the opal this time using only the lumps and droplets to hold it.

Of course I split the jelly opal trying to pry open one of the cracked prongs (fffffff…) and plan B morphed into plan C which was to find a new stone…a sun stone that seemed to fit in it’s place. So I annealed the shank and got to work coaxing the existing blobs and droplets around the sun stone.

Yeah, no. It wasn’t meant to be. I could NOT get the stone to sit securely in the end because the blobs were too thick to move. So…I thought – what the hell, I’ll add some more blobs to this blobby ring and use the existing caverns between them to set some CZs, a total 180 degree shift from using a lovely raw stone.

But now I couldn’t get beyond the look of the ring with those gigantic blobs. It was off balance, sooo…out came the CZs as I contemplated throwing the shank into my crucible in absolute defeat. That was when plan D came into focus which was to attack the shank with the toothiest burr I could find, maybe out of anger, I don’t know. So now all those carefully melted and placed wax droplets I’d placed on the ring in the first place were chewed down. At last I set a white topaz into it which is a million miles from the raw stone(s) I’d started with.

I’ll leave it on the shelf for a while so I can work on other pieces. It’ll sit in that limbo between ‘work in progress’ and ‘done!’ so that in a few weeks I can see it with fresh eyes, this wretched morphed ring.

Update: after some fiddling and a sore back from bending over my vice here is the finished ring…set with a mixture of 7 faceted stones including the white topaz, and assorted CZs from my random collection. Amen.